I’ve been playing with Rust for a while now. With a few thousands lines of Rust code under my belt I can’t by any means claim to be an expert, but I’ve formed a few opinions on it. I mostly like its syntax very much. It’s refreshing compared to many other languages out there. I also consider Rust a complex language. While I can easily develop code in Java, which is what I’m currently doing, without having ever written a line of code in it, Rust is different. Just like with your first book on C or C++, you have to actually learn Rust.

So why did I start looking into Rust? Well, in the beginning it was just curiosity and wanting to learn something new and I had to choose between Go and Rust. I first looked into Go, took the official language tour and had understood its syntax in about 1-2 hours. That, of course, doesn’t mean I mastered it, but I was ready to program something in it. And that’s also the key strength of Go: you can learn programming in it right away, it’s extremely simple.

Then I started studying Rust and after half a day spent on a train reading parts of the Rust book, I ported a small CHIP-8 emulator to it in one day. Just a small exercise to become more familiar with the language. Throughout the following month I continued reading the Rust book and even re-reading chapters, in order not to forget things. It is necessary to use a language in order to remember it: this is true both for programming languages as for spoken ones. And the more complex a language is, the easier it is to forget it and Rust has a learning curve which is steeper than Go or C#.

I would say that a C++ developer can easily program in any C-dialect (Java, C#, Go, JS, etc.) and can easily learn languages such as Python or Ruby. Rust is a paradigm shift and takes longer to learn.

About two months ago, I had to start the development of a command-line project and needed a decent standard library. The end-result had to be a native, statically linked executable. Realistically, the possibilities were: C/C++, Rust or Go. For C++ the STL was out of question, because I think it’s terrible and anyway lacks many features which are essential. Qt is a beautiful C++ library and I use it gladly whenever I can, but static linking would require a commercial Qt license. On top of that, compiling on multiple OSs would require a rebuild of the static Qt library on each OS, so a lot of extra work.

But apart from all this, there was also the fact that the project in question was boring to develop and I wanted it to be fun. So while I briefly considered Go, I went almost immediately with Rust. Go is not just simple, it’s simplified. It lacks many important constructs present in other languages for the purpose of simplicity. While the simplicity of Go can be refreshing and has its charm, I found myself naturally gravitating towards the complexity of Rust.

To be clear, I don’t like unnecessary complexity and that’s why I am not using most of the new features to be found in C++. Complexity has to be kept simple. Rust set a number of goals for itself and some of them are complex to solve without a garbage collector. Within the complexity which arises from these goals, it needs to keep things as simple as possible.

Having said all that, Rust is not yet a mature language in many ways and can’t be used for just any project like C/C++. Its library is less rich than that of Go, some its standard library does have, in my opinion, an odd syntax and compiling can be really slow.

I must say I changed my mind. I definitely see a future for Rust, because if there are enough talented programmers who think it’s fun to program in it, it will grow. That’s a safe bet. The only thing it must avoid is to have people implementing useless features in it, the way it is being done in C++, just for their academic score. But before that happens Rust will definitely flourish.

One of the aspects about Rust in connection to closed-source projects which needs to be mentioned is that there’s a lot of debug information inside of a Rust executable, even in release mode. Every panic! in Rust prints out a lot of metadata.

Let’s take for instance this small sample I created:

It will print out:

By setting RUST_BACKTRACE to 1, it’s even worse:

I found these privacy issues related to closed-source projects being mentioned in this thread on GitHub, but I didn’t find any ready-to-use solution.

So the obvious and only solution is to modify the Rust compiler and that’s exactly what we’re going to do. While I’m describing how to do this on Windows, the parts not related to the build process are valid on Unix as well.

I’d like to mention that, in order to avoid this hassle, I briefly looked into Go to check how much metadata was to be found in Go binaries. The answer is: a lot. And it’s even way worse than in Rust, because Go has reflection and patching that out of the compiler is way more difficult and may break lots of stuff.

Another reason worth mentioning why Go was a no-go is that at least on Windows the capability of Go to call C-code via CGo requires the mingw compiler and that leads to a whole new set of problems.

Extremely important, however, are the packages of Visual Studio you need to install. Initially, since I didn’t think I needed many, I limited myself to the essential and got strange build errors. It took me a _lot_ of time to understand that I needed to install certain additional packages in Visual Studio. If you’re the kind of guy who just installs everything which comes with Visual Studio, then you’re good to go. But if you’re more like me and want to limit the installation size, here’s the essential packages you absolutely need to install in order not to anger the gods: 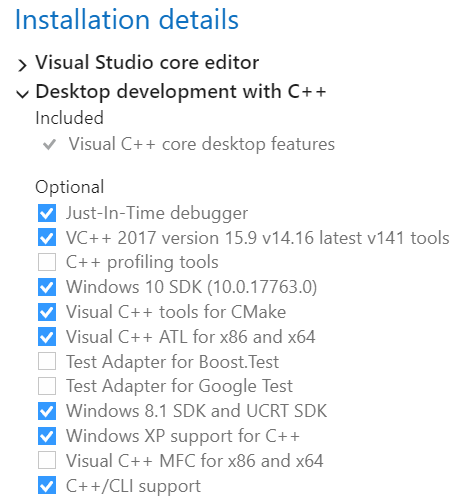 Build instructions can be found in the README. The relevant part for us is:

The build triple I used is ‘i686-pc-windows-msvc’, because I needed the application to be 32-bit, in order to maximize compatibility. What I did is to copy the ‘config.toml.example’ in the main directory to ‘config.toml’ and modify parts of it.

The following are the parts I modified:

rustc is a bootstrapping compiler, which means that it uses itself to build itself. There are 3 build stages called stage0, stage1 and stage2. Only at stage1 the sources in our directory are used. The resulting compiler then builds itself again in stage2. This process is described in detail on this page.

Finding the panic! macro is very easy: it’s inside src/libcore/macros.rs.

While the first instinct would be to patch this macro, if we look at what is called inside of it, we can see it calls the macros file!, line! and __rust_unstable_column!. These macros are defined in the same file:

Unfortunately, they are built-in. However, patching out these macros is much better than modifying the panic! macro, as it solves the issue at its roots and prevents these macros from generating metadata elsewhere.

So I searched for the “column” word in the whole source tree and after a bit of inspection finally got to the location where built-in macros are expanded, which is in src/libsyntax/ext/source_util.rs.

So I patched out the relevant parts:

After these changes we can open the Visual Studio command prompt and compile by entering:

The compile process will take a while. If you have many cores, you can try to speed it up by changing relevant parts in the config.toml file. It can also happen that the build ends with some strange error. This may happen if you’re compiling for 32-bit and LLVM exhausts memory. The documentation mentions this. It’s not a big issue, just relaunch the build command and the build process will continue from where it left off. It never happened to me that I had to rebuild more than once.

If the build ends successfully, you should end up with a rustc compiler in build/i686-pc-windows-msvc/stage2/bin. I didn’t find any cargo.exe in that directory, so I just copied the one from the official installation into it.

I then prepared a batch file to launch the Visual Studio command prompt for the correct Rust version:

And compiled the release of the test binary via:

The output now is:

If we set RUST_BACKTRACE, the result will be the same.

After inspecting the executable we can see that there is still some metadata left in the shape of some absolute paths, such as:

All the paths I could find were related to the path of the compiler and not that of the project. If you’re bothered by them, it’s easy to write a simple Python script to zero them out as a post-build step.

Now we could be ready, save for the fact that the libc wasn’t linked statically into our executable. If we take a look at the import table, we can see the ugly imports produced by newer versions of Visual Studio. 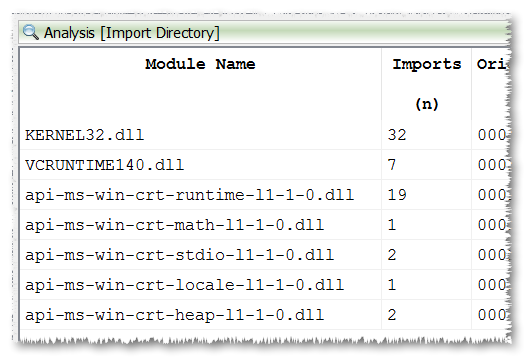 To solve this we need to invoke rustc like this:

I found the relevant documentation for this here. But we want to specify this flag for cargo. We can achieve this by setting the environment variable RUSTFLAGS:

Now after the build process, we end up with a bigger executable and no external dependencies apart from kernel32. Perfect!

At this point we only have to strip the debug directory from the PE. We can do this by using a simple script for Cerbero Suite or CFF Explorer. To be honest for my programs I still use a CFF Explorer script and never bothered writing one for Cerbero.

You can call this script fixdbg.cff and launch it directly as the cff extension is associated to CFF Explorer. This can be arranged as a post-build step.

Let’s finish this nicely by maximizing compatibility. Now that we have a clean, statically-linked executable, we can try to make it run on XP. We just need to modify some fields in the Optional Header of the Portable Executable.

We modify these fields as follows:

And now it’s time to try…

We have a stripped Rust executable built with the latest stable Rust compiler and Visual Studio 2017 running on Windows XP!